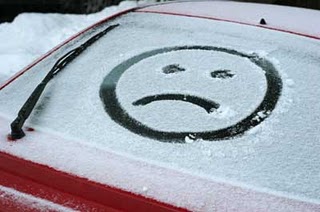 With the onset of winter, many people will go through the “winter blues” and some may not even understand why they are experiencing depressive symptoms such as difficulty waking up in the morning, morning sickness, tendency to oversleep as well as to overeat, and especially a craving for carbohydrates, which leads to weight gain.
Other symptoms include a lack of energy, difficulty concentrating or completing tasks, and withdrawal from friends, family, and social activities.

All of this leads to the depression, pessimistic feelings of hopelessness, and lack of pleasure which characterize a person suffering from “Seasonal Affective Disorder”. Basically it is the brain’s reaction to a form of light deprivation.

As I’ve posted before, my Moon-baby has suffered from bi-polar depression her entire life. It’s a disorder which is generally passed down from parent to child.
In the case of her mother who suffered terribly from “manic-depression”. Manic depression involves dramatic moods swings from moments of elevated energy levels and euphoria to moments of total despair! Her mother lived with the disorder for 69 years before she passed away last year.

In spite of the fact, my Moon-baby has accomplished some monumental feats in her life while battling this disorder, which in most cases incapacitates you with the lack of focus, drive and concentration.  Most people are doomed to a lifetime of being homebound or in some cases, institutionalized.
She has graduated from Ole Miss with a degree in business accounting and has served as a US Treasury agent for the last 22 years. She has a great courage within her that makes her get up every morning and do what she has to do. She is my hero!

Thank God, my sweetie-pie has been proactive in her research and treatment of this disorder along with her treatment of her bi-polar depression. This has entailed a lifetime of tweaking the correct combination of anti-depressants and stimulates.

I can see and sense the mood changes after a few days of the winter grayness when the sun doesn’t shine. I can expect to tread a little more lightly and be abit more attentive to her needs during this time of year.
Every year around this time she will begin “light therapy”. It’s basically a dawn simulation. She will sit in front of a special lamp which simulates sun light for a period of about 30 minutes every morning.

What this does is it triggers the brains production of the hormone melatonin. Melatonin affects the brain’s circadian rhythms which in turn affects patterns of core body temperature, brain wave activity, hormone production, cell regeneration and other biological activities.

In many ways, we all still have those primal instincts imbedded into our DNA from centuries of evolution. Early man feared the winter months for the obvious reasons, hunger, shelter and the innate biological fear of loneliness in the cold.
That’s why our bodies will store a little body fat during the winter whether we like it or not. It’s our primal instincts that are etched into our genetic coding from our ancestors who struggled to survive until the warmth of spring.