Besides Art classes, History was always one of my favorite subjects in school. I’ve always prided myself as abit of a history buff, especially when the subject of ancient was concerned.

One of my favorite books is “ , : Daily Life in Ancient Egypt “, by Barbra Mertz.
This book sets aside the well documented lives of famous pharaohs, and turns instead to the day-to-day lives of the ordinary people of Ancient Egypt.

But I have to admit I was humbled last Sunday night when I watched a program on PBS called, ”The Silver Pharaoh” . I had heard very little about Psusennis I and his silver coffin.
Below is an article about the show!
On Wednesday, November 3, 2010, Public Broadcasting will air The Silver Pharaoh, an hour-long video blending a tale of the history of archaeology in WWII and that of Psusennis I, the best known Pharaoh of the Third Intermediate Period (ca 1069-664 BC). 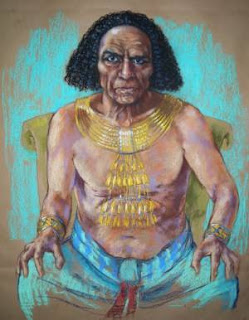 Portrait of Psusennes I by Melissa Dring, Forensic Artist. Photo Andy Webb © Blink Films
This powerful fellow illustrated above is a reconstructed drawing of Psusennis I, a king of Northern Egypt during the tumultuous times after the end of the .
The is the best known period of Egyptian history, that is to say, best known to the non-academic public: it is the period of Ramses II and Tutankhamen. Ramses II was the most powerful king, controlling all the Nile valley, but he made a fatal mistake that the Greeks would recognize as hubris: he built a third capital, Pi-Ramesses in the Nile Delta, dividing his forces and decreasing his ability to maintain control over the entire upper and lower Nile.
When the river changed course, Pi-Ramesses was abandoned, and Pharaoh Psusennis I moved many of the structures, stone by stone, to his capital Tanis: nearly 3,000 years later, Psusennis' collecting mentality would completely confuse archaeologist Pierre Montet. 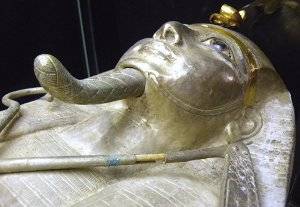 It’s was one of the most fascinating shows that I have seen in awhile. If you ever get the chance to view it, I promise you won’t be sorry!