Loving Someone with Bipolar Disorder! 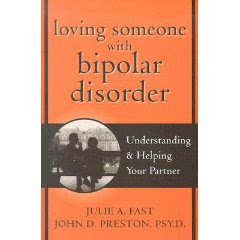 I’ve been reluctant to write on this issue for awhile but came to the conclusion it was time to put it out there.

Bipolar disorder…When some people hear this term they will automatically attach the stigma that is connected to this mental condition. They think this person is crazy, mentally ill or deranged. They are all wrong. I know, I was one of these uneducated people.

First…at little history behind where I’m coming from.


When my Moon-baby and I first started dated, she told me right up front that she was bipolar. I was taken aback in the beginning but after she realized that I wasn’t scared away by her confession and that I was sticking around for the long haul. She gave me a couple of books to read on the subject. Then she would ask me again if I still wanted to continue with our relationship.


One of the books was, “Loving Someone with Bipolar Disorder”-Understanding & Helping your Partner by Julie A. Fast & John D. Preston, PSY.D.


Along with the book, I started a journal to record my inter-most thoughts and feelings to write down things that I may never say out loud. Private thoughts to get some perspective on what I may think and deal with and what bipolar means to me. That journal was my outlet to issues that I may never been able to discuss with her.

I still have that journal after three years and occasionally I will pick it up and look back on what I felt at that time in our relationship.


The traditional definition of Bipolar is as follows: also known as manic depressive disorder or bipolar affective disorder, is a psychiatric diagnosis that describes a category of mood disorders defined by the presence of one or more episodes of abnormally elevated mood clinically referred to as mania or, if milder, hypomania. Individuals who experience manic episodes also commonly experience depressive episodes or symptoms, or mixed episodes in which features of both mania and depression are present at the same time. These episodes are usually separated by periods of "normal" mood, but in some individuals, depression and mania may rapidly alternate, known as rapid cycling.


From my experience the best advice I could give anyone who really and truly wants a relationship with someone who suffers from this disorder is:


Make a list of your issues and a list of issues together as a couple. You have to have a willingness to learn and work together in between the episodes. Be willing to change or reexamine your own behavior.

Partners with bipolar need you to trustworthy, honest, compassionate, positive and most important stable. You have to be consistent.

Setting goals that are clear, attainable and realistic. Know your limitations but accept set backs and disappointments. You must stay the course, even though your process may seem slow at times. You are still on the path you have started on. Sometimes flexibility may play a part in the process so be open to changes…it’s a process, not a result!!!


Last be not least…learn the symptoms. Oblivious changes in their moods, manic to depressive and vice-versa. Lack of focus, concentration and attention to details. Suicidal thoughts and impulses! Try to learn the early warning signs.

A good treatment plan that incorporates lifestyle changes, behavior therapies, diet and exercise will create a well balanced plan that fits BOTH your lives.


Basically this is a condensed version of what you need to do but you may get the general idea.

Over the last three years my Moon-baby and I have been together, she has not experienced any manic episodes or severe bouts of depression. Yes there have been days that she will have the blues and periods where she doesn’t feel like getting out of the house but all in all we have set our goals and reach many of them…together!